It has been absolutely beautiful weather wise here in Vancouver!  Summer has settled in quite nicely and the temperature is rising.

Nights are spent with a sheet covering me at most.  Even then it is often too hot.  I have one fan that is a good size that I lug from room to room.  I think I will head out this weekend and get a smaller one for my bedroom.

Last year I had taken the fan apart and cleaned it. (They can get quite dusty)

I put it together forgetting to screw the butterfly nut onto the propeller.  Propped it up in my room, turned it on and went to sleep.

A thunderous crash about an hour later had me leaping scared as hell from my bed.

You guessed it.  The propellor inside its cage had come off because someone we know (and love) (hey, I’m gonna milk it, okay?) forgot to put the screw on to hold it in place!

I can assure you it took quite some time to fall back into a blissful slumber after that little incident.

I am babbling though.  Gee. Haven’t done that in while, now have I?

So, yes, I need a smaller fan.  Not one that if it fell apart could potentially kill me.  That fan has never graced my bedroom since this occurrence. I have a far too active an imagination.  Visions of propellers flying through the night air slicing and dicing me like a kitchen chopper doesn’t induce one into the realm of relaxing nirvana.

As I drove into the office today I greeted the morning and cranked the radio up and rocked out to a few good tunes.

Lately the radio has been running ads for up coming TV summer series.  One is for ‘Extant’ that features Halle Berry.

The premise of the show is that she is an astronaught and goes out into space….alone…for a year. She is doing a bunch of strange experiments and somehow she manages to get knocked up though she has no memory of this.

(What did they put in her Tang?)

A line from the trailer played on the radio has Halle asking this question. Not too certain who she is talking to either.

“Please, just tell me what you did to me?”  Halle beseeches.

And I couldn’t help myself and just burst into laughter.  it just had such a strange connotation to it.

Truth be told, I really don’t know if I’ll check it out.  The premise for it sounds ‘odd’?

Thing is I like Spielberg’s body of work, so it may be worth a gander.  There are a few things though that don’t add up right off.  First, I don’t think they would ever send just one person out into space.

The craft that she’s on appears to be quite big too.  That’s alot of work for one gal.

It seems to have the premise of the creepy old abanodoned house feel to it  that we see in horror flicks but it’s a few hundred thousand miles away floating about in space.  Hmmm.

Then of course she does go into the ‘basement’ and wakes up not knowing what the hell happened and pregnant to boot.

I wonder why they always make aliens look so creepy in Sci-Fi movies?  Quite often their appearance is lizard-like. I’ve always liked the aliens in Star Trek and Star Wars.  They were what we affectionatley refer to as ‘humanoid’.  They resembled us but had distinctive attributes that dictated what area of the galaxy they were from.  Better not be from the Eastside of intergalactic hood.

The wise ones and Cap. Kirk’s battle buddy.

As we well know, life forms can take on a multitude of images and they might well not be in a state that we would recognize.

Still something to be said for our collective imagination.

Careful, ET, my friend. An Alien dude from the Eastside is stirring up shit.  Ate the teacher and left the apple.

If I were to put together a sci-fi outer space series, I would want to explore the big picture.  Really get into the meat of other ‘civilizations’.  Whether they are civilized by our definition of this term, well, that would be a shrouded mystery, now wouldn’t it?

Next Generation was my favorite in the Star Trek series.  They explored a lot of psychological aspects that were really cool. 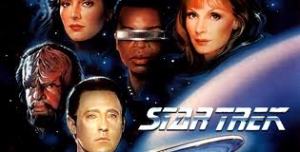 I would want to put together a series that took it even deeper than that.  One thing I would explore is the idea of ownership in space.

Kind of like how we, as humans, section off not only the land we thrive upon but the deep blue sea that surrounds us as well.  A portion  ‘belongs’ to Canada, to the USA, to Europe, to Africa, to Asia, etc.  The thing is, what one country does to their ‘piece of the ocean’ affects us all.  Just as what happens in another country on the other side of world does have an impact. It always will  Yet we have this NIMBY attitude.  Outta sight, outta mind as long as it doesn’t appear in my neck of the woods…I’m cool.

We are kind of like an ostrich with our head in the proverbial sand at times.

I would also want to explore the idea of intelligence.  The concept of it.  This really fascinates me. How we actually measure intelligence and decide who and what are bestowed with this gift of sorts.

I recently watched a documentary on ‘The Nature of Things’.  The show followed the migration of the Monarch butterfly and how its migration was discovered and mapped.

Such delicate creatures that undertake an amazing journey!  Why?  Don’t know. And they are equipped with sensors that are just incredible!   Is all that they do based upon instinct alone?

I would want to explore the crop circles as a language and turn them into 3D images.  (And yes, I do believe they are a language)

And maybe one day I will have the opportunity to develop such a show.

I wonder sometimes what would result if shows were created theoretically.  If ratings and advertising dollars weren’t an issue.

What would it be like to have no borders?

What would it be like to collaborate collectively on a global scale just because we are human.

The good of the people.  The respect and earnest interest in our well being…everywhere.  The desire to share knowledge freely.

We’ve put a price tag on so many things in this life.  Lebron James, for example plays basketball.  Yet the dude is worth multiple millions of dollars. Why?

I played basketball in high school.

Okay, I wasn’t very good and I’m a girl but I had fun! And I’m nice dammit!

My point being that what if the challenge wasn’t monetary?

What if the challenge wasn’t power and control?

What if the challenge was…just because.   Hmmmm.

In any case, I will toddle off now.  Enjoy your day and as Mr. Spock so fondly states,

One thought on “Trailers……You Lost Me at Please!”