I’ve been out for the majority of this day. It’s been a good one, a rich one.

The plan had originally been to head out to Deep Cove and hike up Quarry Rock then grab a nibble.  A late night and the uncertainty of the weather had my daughter and I going for breakfast in Deep Cove and later exploring Cates Park.

Now that I am working over in the area its time to reacquaint myself with my surroundings.

It really is beautiful.

Later we went back to my daughter’s home and had some tea.  I then left to meet up with some friends to take in Douglas Coupland’s exhibit at the Vancouver Art Gallery.

This, quite frankly, was one the best exhibits I’ve seen a good long while. It pounced and stung quickly.

A table containing a chewed up plastic container with rusted out aerosol cans and the like inserted into the slots greeted us. The table base of styrofoam and plastic was rigged with wires….

An explosive thought, yes?  This was going to be good!

Photographing the pieces was highly encouraged. Lego structures were featured quite prominently. Then I began to think about what these plastic pieces were made from.

Can you destroy a Lego piece? I’m really not too sure. 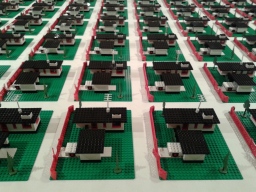 Images and structures continued to assault and intrigue the senses. Each section of the exhibit was deliberate in its intent. One display held one hundred housing constructs made from Lego. All were identical in their suburban design. This was the dream sold to the masses after World War II.

Everyone would have the home with the white picket fence, a car in the drive, two and a half children, with two weeks vacation every year.

It was the ideal that was sold to a war weary world and we bought it.

Consumerism was born in a big way.

Now you had to have the automatic washer and dryer, then the colour TV. Of course, TV dinners came into play and my God, the things that decorated our homes!

And do you know the one thing these all have in common? Oil. 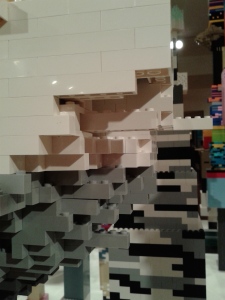 They have an oil based compound in their makeup. All plastics do.

We came into a room that housed a miniature town of nuclear reactors, an automotive assembly plant, electrical grids galore and cameras everywhere.

I leaned in to study the intricacies of this designed piece. One of the cameras moved to watch me and so now curious I moved to my left.

I moved to my right and yes, it followed me. I repeated this several times with the same result.

I stepped back then repeated my movements. Nothing.

So they had set it up with a sensor. Brilliant!

Big brother is watching. Always…should you happen to get to close.

The next room screamed at me.

“I miss my pre-internet Brain”

The walls were filled with identically sized canvases of various colours with phrases on them such as the one above. And perhaps because I’ve started a new job where I am stepping back in time in terms of technology and using a DOS based progam, there is a certain appreciation and reflection of how far we travelled on this technological yellow brick road.

And like those erstwhile characters who travelled to Oz, will we find that we had everything we wanted but were just to sidetracked or blind to see it?

We stepped into the next room and I felt the swell of emotion hit me. In the center of the room stood two structures designed to replicate the twin towers in New York. The walls were covered with geometric dotted art pieces. 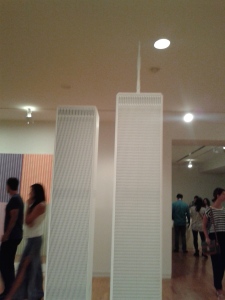 They didn’t look like much visually. It wasn’t until you raised your camera phone that the image came through.

And tears stung my eyes.

The dots were the people jumping from the twin towers on that fateful day. One was of Bin Laden.

I stood for a moment contemplating the obscurity of these images.

Do you know how much our world changed that day? It changed dramatically and irrevocably for the worst. Fear championed that day. We were collectively horrified at the darkness humanity had fallen to.

And for no other reason other than it is intrinsically instilled in our DNA, we laid the blame on one man.

Bin Laden, who would live out his days in the caves of Afghanistan. He’d surface from time to time uttering the all too common phrase ‘Death to America.’

And this was the face of evil personified.

The final room of the exhibit held a plethora of items, all made from plastics and other manufactured textures.

Several oil cans were bunched together surrounded by toys that had been produced with said product and with the intent of being inconspicuous was the plastic model of a duck drowned in oil.

This was tucked at the base and could have been easily missed. Perhaps that was the point as all too often in this life we turn the other cheek so to speak. Easy to adopt the out of sight, out of mind kind of crap.

We then went upstairs and checked out the other features that were being displayed.

Some of the pieces are interactive art. And I really like these pieces. One that has been up for awhile shows a red curtain. A few moments later an older woman, rather dowdy in appearance, rather bookish as it were steps through the curtains. She is wearing a shapeless deep blue suit with sensible black shoes.

She stands with hands folded in front of her. A nervous smile plays upon her lips.

I’ve seen this before and I know what this piece intends.

So I stood next to my friend and watched.

She was feeling anxious, a tightness in her chest. This would shift subtly to exasperation. Then the sense of being a little annoyed would wash over her.

About seven minutes in the woman is shifting a bit….though it is very subtle.

I asked my friend. “Do you feel fatigued? Tired and heavy?”

“Does the woman appear tired and exhausted from standing before an audience?”

Then the woman turns and disappears behind the curtain.

Not a word is spoken…yet the emotional kaleidoscope provoked is intriguing. 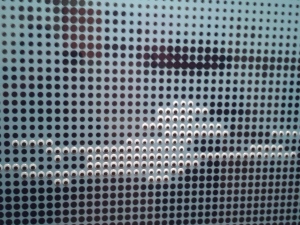 What do you see in this image?

Douglas Coupland is an author as well, best known for penning “Generation X”.

There was a portion that totally intrigued.

He took the pages from his book and chewed them into pulp. He then shaped them into hornet nests. He also had real hornet nests in attendance (minus the hornets) to provide an honest comparison. 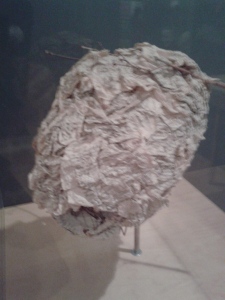 The challenge in this piece was the longevity of the written word.

Art should make you think. It should inspire on some level.

They had a feature upstairs that displayed landscapes, portraiture and the like. What could possibly be interesting about portraiture, you ask?

I like to try and divine the expression that’s been captured. That is the intrigue for me in this form.

Landscapes can be dramatic or just plain.

Again, art is very subjective. We are not going to like all of what we see.

When someone’s work speaks so eloquently to me, then the artist has done their job.

And I leave myself open daily. Each day I exist has an altruistic element to me.
And this is what Douglas Coupland had to say regarding this exhibit and I quote.

“I look back at myself two decades ago, and I think of how different me and my brain were back then…and how differently I looked at the world and how I communicated with others. The essential ‘me’ is still here…it just relates to the universe much differently. What will the world look like when anywhere becomes everywhere becomes everything becomes anything? We’re almost there.” 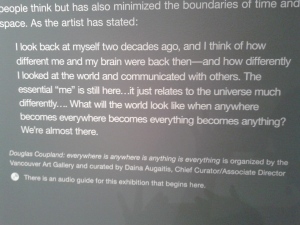 My friends and I later went for a nibble and discussed some fascinating topics. We spoke of the tragedies of this world, of its beauty and our responsibility to it.

In that context I have only myself to hold to account in how I interact with the world that has been provided to me and that, like a blank canvas, is up to me to give back.

It struck me today this odd sense of entitlement we have. These gadgets we’ve been told that will make out lives unspeakably happy.

The house that once looked like a million others, has now escalated to a family room (aka great room?), a living room, a kitchen, an eating area, a formal dining room, master bedroom with full ensuite (shower, soaker tub or Jacuzzi, double sinks and a walk-in closet). Then of course all the other bedrooms should have a bathroom. Balconies and BBQ pits and hey, you really should have an in home theatre. A bliss room is good along with an in-house gym as long as you’re in it for the long haul.

When did this become normal?

Do you know the ecological footprint you’re leaving in wanting and having all this?

And what is the point?

Are you above me because you’ve managed to assemble these accruements into your life?

It takes a lot of energy to produce this and a great deal more to maintain it. 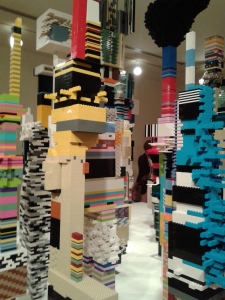 And personally I want to focus more on sending out the love that I feel so blessed to have in my life back out into this world.

Things won’t make me special or important. Just living with a grateful and forgiving heart will, and in my mind, give back to this world that has offered so much.

If there is a secret to this life, I haven’t a clue. I’ll just venture down this avenue and seriously enjoy all that’s been afforded to me.

Douglas Coupland’s exhibit gave me serious cause to pause and really look at how I can improve my interactions with our organic world.  After all, I am an organic being.  We all are.

If you live in Vancouver or have access to the VAG I would strongly suggest you check out this exhibit. It is my understanding that this show will be moving to Montreal at the end of September.

Any feedback you have is always welcome and thanks for checking out this post.