And I watched the sun settle on this day.  What captivated me was the mountain peaks now cast in virgin snow.  Their beauty was breathtaking as I made the trek with camera in hand wanting to capture the moment.

I cursed not having a tripod.  I cursed that the overpass at the foot of 4th Street is still not completed.  I railed that I could have taken another route.   There were options!

But in the end, perfection can sometimes be so totally incomplete.  And this is what happened.  Just me dazed by the beauty that was surrendered before me.  And I was a fortunate witness.

To be party to day’s sweet surrender into night.  The magical glow of those last few rays of the sun on virgin snow.  The absolute delight that I was included, caught in a lovers’ exchange.

Basking in the afterglow beside a silent river and puddles that had been rendered frozen from winter’s chill. 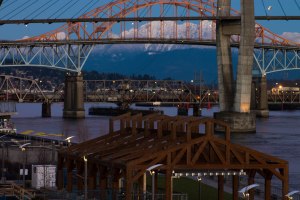 And all I could do was stare for a time at the mountains beyond the Patullo Bridge as they were now cast in shadow and withdrew from my sight like a timid lover.

I turned and headed back.   The walkway now all but deserted.  A few young men whipped by on their skateboards and I smiled as they navigated along the boardwalk.  They nodded in greeting and the last young man offered a ‘how are ya?’ 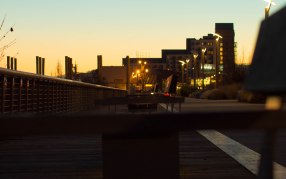 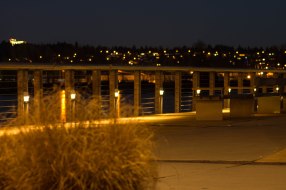 Gone too fast for a reply.

Had I been able to do so I would stated that in that moment I was ecstatic.  I’d stolen a moment it seemed, been given a gift. It was an unexpected delight.

To experience that moment when the mountains are first covered in virgin snow.  They appeared magical and oh so lovely.

And for me day’s end was just that. 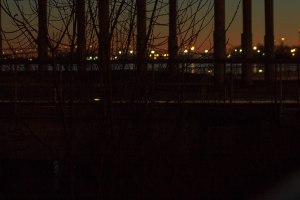