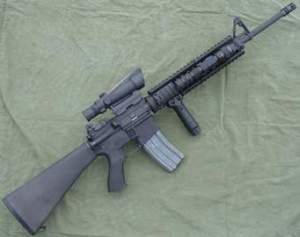 I’ve voiced my opinion on the whole luv-a-affair Americans have with their guns a few times..

And I just don’t get it.

You claim to value life, yet mass shootings have become commonplace in your country.   After the Orlando shootings the reports that came out were poorly researched and  somewhat sensationalized as a ‘terrorist’ attack.

And despite the fact to the contrary it is still being sold as a terrorist attack.

The individual responsible was in fact an American.  Born and raised in New York with a license to carry a concealed weapon as he had been working as an armed security officer for some time.  Apparently a background check was done back in 2013.  I’m not sure what that entails but from what we have come to know he was an abusive individual with severe emotional issues.  Because he was of middle-eastern descent, it was assumed he was a ‘terrorist’. 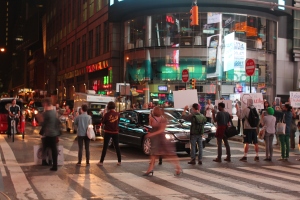 The tragedy that occurred has once again brought up the all too familiar issues surrounding gun control.

They cannot even get a bill struck down that will allow them to study gun violence!

‘Former Rep. Jay Dickey of Arkansas authored an amendment that restricted funding for research into gun violence and its effects on public health. Dickey tells Steve Inskeep he now has deep regrets.’

For the entire interview the link is below.

Four days after the Orlando tragedy, they tried to again just have this clause removed.  They just want increased funding to study it!!!  It would seem the NRA has a stronghold, however, and it was shot down in a heartbeat.

Shops in New Westminster, BC  Canada step up to show their support during Pride, photo by N. Pilling

I just watched an interview with Chris W. Cox who is at the top of management in the NRA’s organization.  According to Mr. Cox, guns are not the problem. It is the ‘radical Islamic terrorists’ that are the problem.  It is the government that is the problem.  Americans have a God given right to defend themselves.   This phrase caught my attention.

Let me ask Mr. Cox this.  Should all of us not have the right to protect ourselves under the eyes of God?

Are we not, according to any number of religions around the world,  of one God?  Yes, the prerogatives of ‘God’ seems to have been lost in translation as well.

Chris Cox states that restricting the type of weapons Americans can purchase has been tried.  I find it really difficult to listen to this kind of rhetoric.

I live in Canada where we do have gun control.  I’d like to see it toughened up even more though.  I completely understand those that live in the rural regions of our country may very well require shot guns and some high powered rifles.  They come into contact with animals in the wild far more frequently, and if they have livestock then they need to be able to protect.

I get that totally.

What I don’t understand, will never understand is why any person living in an apparent civilized society needs to be in possession of military grade weapons that can mow down a room full of people in a few minutes.

When the 2nd Amendment was enshrined in your constitution back in the 1790’s, just six guns made worldwide in the 1700’s.

The other popular weapon of the day was the cross-bow, and while they were effective, guns provided a higher degree of accuracy. 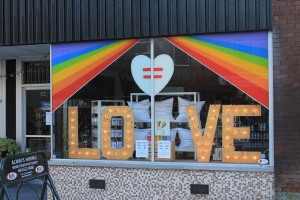 Taken in New Westminster, BC, Canada in support of Pride, photo by N. Pilling

‘The Second Amendment was based partially on the right to keep and bear arms in English common law and was influenced by the English Bill of Rights of 1689. Sir William Blackstone described this right as an auxiliary right, supporting the natural rights of self-defense, resistance to oppression, and the civic duty to act in concert in defense of the state.[8]‘

Well, it is safe to say that guns have evolved.  I have to wonder if the forefathers of America would have put this in place had they known the impact it has had on their country.

What I would like to know is why my American neighbors feel their rights are being infringed upon by being restricted from purchasing guns of this magnitude?   The ones of military grad.

If they want a gun, why can they not be content with a hand gun or a rifle?  Regular rounds…whatever that may be. Six or something like that?

It almost smacks of paranoia that Americans are falling over each other to add to their arsenal.

I feel a sadness for my neighbors as I don’t know what it is like to live in fear that I will be attacked or hurt at any given time on a daily basis.

Once again to the families and friends who lost there loved ones in this senseless act I offer my prayers and condolences.